Hello again, readers! It’s been a while, but soon we will once again enter the world of comic book horror with the mercifully short run of Extreme Justice, a mid-’90s spin-off of the Justice League comic, which, if my understanding is correct, was inadequately extreme. I figured I would give a little bit of information about what the heck this book even is before diving right into it.

Extreme Justice starts with Captain Atom getting fed up with the JLA around the time Ice died and decided to form his own team. That’s about the only explanation I can find anywhere, though it actually doesn’t make any sense in-universe since the first issue of Extreme Justice was released in January 1995, though both Captain Atom and Blue Beetle appeared to be a part of the JLA during the “Way of the Warrior” storyline in Guy Gardner: Warrior, which started in July 1995. In fairness, I am probably the only person on Earth who has spent any amount of time trying to piece together both the Extreme Justice and Guy Gardner: Warrior timelines, so I guess I can’t blame them for not worrying about it too much.

As far as the team itself went, the roster had a pretty good mix of old and new. A few more people joined up along the way but the starting team consisted of the following members: 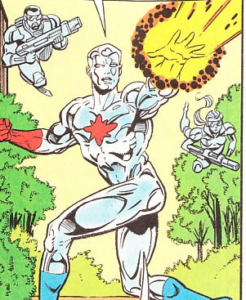 Name: Captain Atom
Strengths: Having a butt that just won’t quit.
Weaknesses: Unsure if he’s too naked to get into a restaurant.
Info: Captain Atom was already the leader of Justice League Europe, the series that ran concurrently with Justice League America (formerly JLI), both of which were excellent books. He was pretty much in over his head most of the time as leader, which was played for actual comedic effect, so it’ll be interesting to see how they handle his leadership here. I’m not exactly expecting Giffen/DeMatteis levels here, but I guess time will tell. 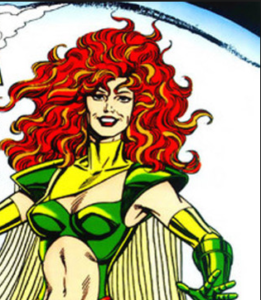 Name: Maxima
Strengths: Pretty much being Superman.
Weaknesses: Kind of a jerk, being focused on breeding with people in a bizarro universe where nobody wants to.
Info: Maxima’s thing is that she wanted to have Superman’s babies, but he wanted nothing to do with her, so…I guess she just hung around the JLA for awhile and then joined Captain Atom when he left? Also I’m pretty sure she now wants to have Captain Atom’s babies at this point, so I’m glad we got some character development going on here. 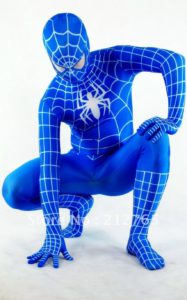 Name: Blue Beetle
Strengths: Being Spider-Man without that whole spider bite thing.
Weaknesses: Not actually having any powers.
Info: Blue Beetle is actually one of my favorite DC characters, but seriously, for some reason the artist decided that Blue Beetle should pose exactly like Spider-Man all the time in this book, despite the fact that he does not have the proportionate flexibility of a spider.
Fun(?) Fact: Blue Beetle was created for Charlton comics in 1966 by one Steve Ditko, who co-created Spider-Man, ALSO in 1966! Perhaps Blue Beetle acting just like Spider-Man in this comic was a subtle tribute to his original origin (or maybe DC was still trying to emulate the success of Todd McFarlane’s Spider-Man series from a few years prior and the coincidence was entirely lost on them). 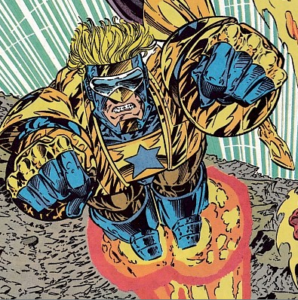 Name: Booster Gold
Strengths: Cool robot suit.
Weaknesses: Pretty much wearing an iron lung, probably can’t fit through doors very well.
Info: Another one of my favorite DC characters. Legally, Blue Beetle can’t be in a book without him, so here he is! His robot suit is pretty bad during this era, but the in-universe explanation is that it’s keeping him alive after getting his ass kicked almost to death and losing an arm. Bwa ha ha? 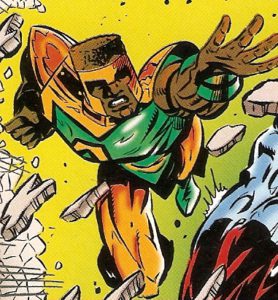 Name: Amazing-Man
Strengths: Can touch stuff and turn into that stuff!
Weaknesses: What if that stuff you touch is stupid and you can’t control yourself at all???
Info: I…honestly don’t have much to say about this guy. He briefly appeared towards the end of the JLA run and then joined up with Captain Atom, so he didn’t have much of a career at this point. I guess we’ll learn about him together!

What hi-jinx will these lovable goofs get into? Will the story have a satisfying conclusion, or will DC yank the plug mid-sentence? Tune in a few weeks from now and find out!