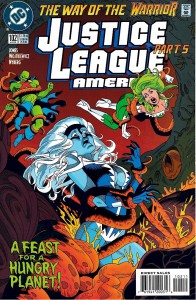 TGH: Welcome back, loyal readers, to Part 5 of the Guy Gardner crossover! We are getting closer! Last time, we met Probert, who was better at being Guy Gardner than Guy Gardner, and the Tormocks took an entire issue to kidnap pretty much everyone. It was the dramatic twist at the end of a normal comic stretched out over an entire issue! This issue, there will apparently be some sexy tentacle time!

TGH: I love that the cover focuses on Icemaiden’s and Fire’s breasts pretty heavily, yet the cover artist went out of his way to draw Martian Manhunter’s leg over his penis because he’s not into guys, damn it!

QP: Fire’s breasts are defying many of the laws of physics right now.

TGH: Poor Icemaiden is the only one getting spooged on. Her face is drawn perfectly to match this situation.

QP: There’s even a vagina crater in the wall over there.

DN: Holy shit, there is.

BW: Legacy characters get no respect, even from tentacle monsters and…oh my God it is!

TGH: There’s something for everyone (who is a male)! 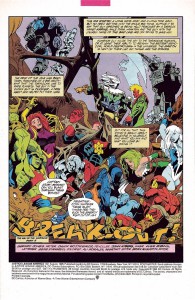 QP: I mean, based on the faces Ice and Maxima are making.

DN: Nuklon appears to be getting the worst of it, because whatever that stuff is, it is in his mouth.

BW: On the upside, dentists will be overjoyed. Gritted teeth so far? Zero! A new record!

TGH: The writers can hardly hide their contempt in the box explaining how the fuck everyone ended up here.

QP: You can practically hear them rolling their eyes.

TGH: “Look, this story is fucking stupid, but it’s our turn to continue this story so here we go.” And in fairness, they do their best considering what they had to work with from last issue.

BW: Can they turn the lump of…well, whatever they were given, into a cake? Let’s find out!

QP: This issue actually has a story, unlike last issue, where the plot was “scribbles.”

TGH: We jump from the first page to the next fetish: boobs AND tears. Everyone has pretty much lost hope, and since there’s like 30 people in this story, we have to hear it from everyone. 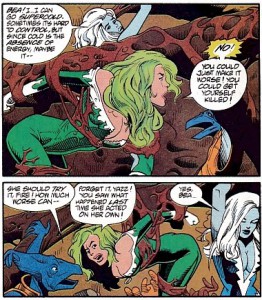 DN: Icemaiden has a plan to go super-cold to get them free and get senpai to notice her. Fire shoots that shit down pretty hard.

TGH: Yaz has Icemaiden’s back. Maybe Yaz likes her?!

QP: Fire’s pretty rude about it. She’d basically rather them all die than Icemaiden take a shot at this.

DN: Grant you, I’d be snippy too if I was bound in a position that can only be called “doggy style.” 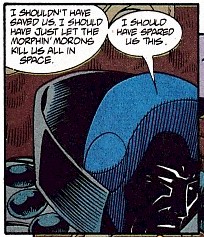 DN: Obsidian basically just says he should have let them all die in space. Like, jeez dude, that’s pretty dark even for a guy with shadow powers.

QP: He’s just a grumpy bear, Maxima, give him a break, God. 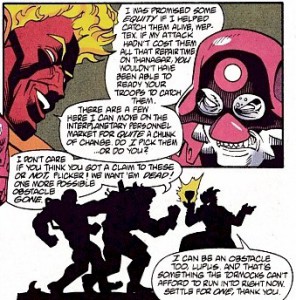 TGH: I guess this whole thing was staged by those X-Men villains from the last JLA issue. Notice how they only show up in JLA because only their team gives a shit about even having/drawing villains that are not lines and goop.

BW: After the bubble gum xenomorph alien hybrids of the last few issues, I’m kinda digging Flicker and his buddy who looks like a magenta Captain Crunch in exo armor.

BW: Works for me!

DN: Thanks to the way comic font looks, every time I think they’re calling the character Fucker.

QP: Flicker wants to sell some of the JLA into slavery, while Clownbot wants to just kill them.

TGH: Flicker dumping his wine on Nuklon’s head just to be a dick is kind of the best thing in this crossover so far.

DN: I think Clown Bot’s name is Tex-mex or something, and then the night elf one is Lupus? 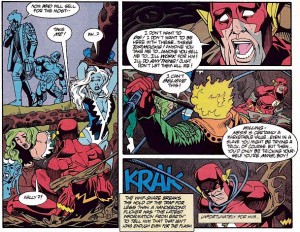 QP: Flash volunteers to be sold into slavery, and there’s some rigamarole about how they have to be fast releasing him or the others will escape I guess? Maybe, and this is just a thought, don’t use a system of restraints that requires all your captives to be released to release any one of them? Just an idea.

TGH: Yeah, they really talked themselves in circles explaining how he couldn’t escape, only to have him just do it anyway. 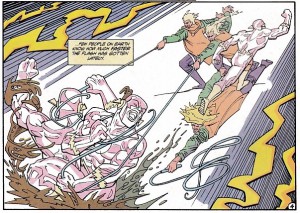 QP: Well, someone forgot to tell Flicker that Flash is a lot faster than he thought. No, seriously, that’s why Flash can break out. 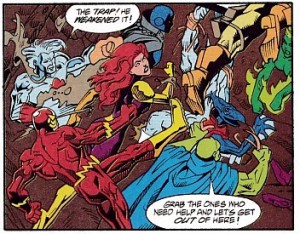 TGH: Flash breaking out weakens the hold on everyone else in this highly-intelligent slime prison, and so they all manage to get out while Flash punches the villains repeatedly.

QP: The panel of Flash punching dudes is fantastic.

DN: I do love a good speed silhouette fight sequence. And with this artist it’s 100% comprehensible!

QP: Yeah, I shudder to think if they’d tried this last issue. 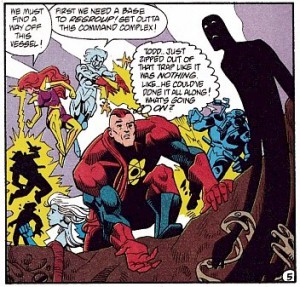 DN: Obsidian apparently could have gotten out at any time. What a dick. 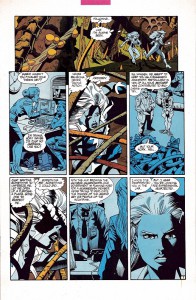 TGH: As Fire and Icemaiden run away, we’re treated to Icemaiden’s backstory, which, frankly, I did not ask for. It turns out she’s sad and not confident.

QP: I would not have thought. 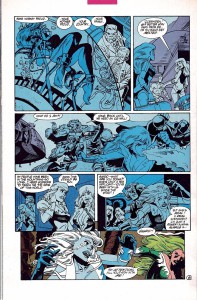 TGH: Her mom was smarter than she was, so she got science-based ice powers while writhing naked in a tank. Do any men in the DCU have naked writhing origins?

QP: And then Fire was shitty to her. And it just kept happening.

DN: She asks what to do on a mission and some Global Guardian asshat basically tells her she is only needed in Ice-wall related situations. Nice.

TGH: No wonder Fire thinks she’s not ready to be a part of the team. Every time she turns around she’s crying for seemingly no reason.

QP: Meanwhile, Maxima and Martian Manhunter are trying to find their way out of the ship. 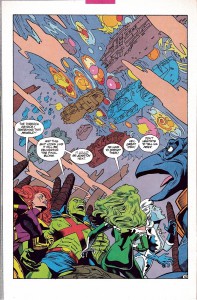 TGH: Yaz suddenly loses his/her shit and it turns out that they’re above a planet being blown up by Tormocks, but it’s that trippy thing where they’re in space and up is down.

QP: See, that’s what an intelligible space battle is supposed to look like.

TGH: “This ship looks like it will be delivering the final blow!” How exactly can you tell that, J’onn?

QP: His nipple hairs are probably telling him.

TGH: I like Yaz shutting down Bea’s stupid comic book dialogue.
“We have to stop them!”
“Ok, cool, how in the fuck?”

TGH: Bea: the one person not in the running for a ride on the Yaz Express. 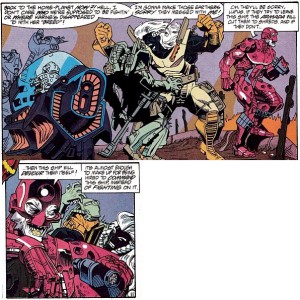 QP: We jump back to our very fearsome villains so they can let us know that the ship will apparently find and kill the JLA itself, somehow. 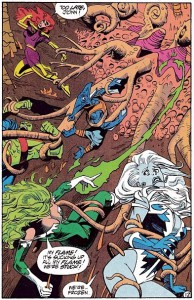 TGH: It’s at this point that the tentacle action begins. 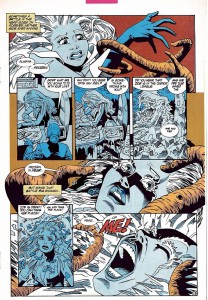 QP: Nobody’s powers work against the tentacles, and Icemaiden starts to have a meltdown. Fortunately, she ice-hulks out as a result, and freezes the tentacles to death. And Fire tries to shut. That. Shit. Down.

BW: Great acting on this page by the way. That first panel is priceless.

QP: I’d make that face if there were tentacles, too. 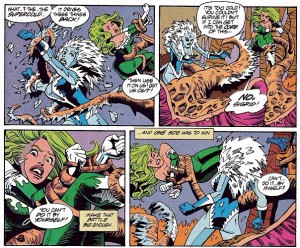 DN: She no longer needs senpai to notice her, she noticed HERSELF. And proceeds to jump into the tentacle monster. 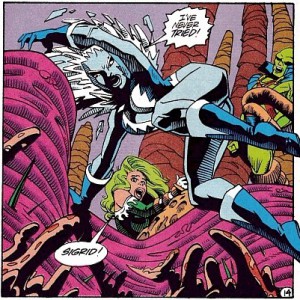 DN: Apparently this thing does not care for the cold, and it spits her right back out. 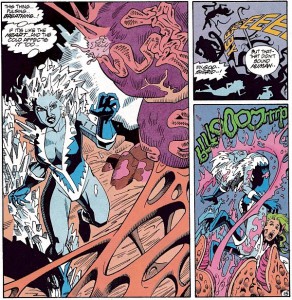 QP: She just needed to tell Fire to go fuck herself. 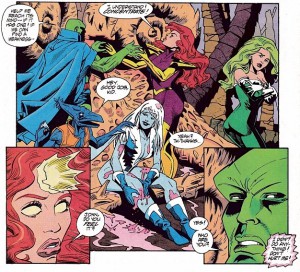 TGH: Yaz jumps on that shit immediately. Sorry, Fire, your window is closing.

DN: Fire has her arms crossed like she finally realized she was about to fall out of that costume at any moment.

TGH: Not only did Icemaiden stop the tentacles, but she also confirmed that the ship is alive, giving Maxima and Martian Manhunter a chance to talk to it. 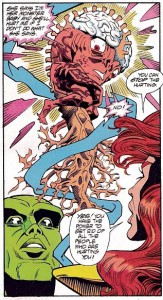 QP: Maxima and Martian Manhunter do some Vulcan mind-melding with the ship, discovering that it’s Karine’s child, which is horrible and freaky.

TGH: Yeah, this is a little fucked up. The ship is actually a talking fetus. Karine has somehow convinced the fetus that it has no power, despite it being a sentient death ship.

QP: Icemaiden’s feeling pretty badass right now, so she decides to join the mind link and add “therapist” to her resume. 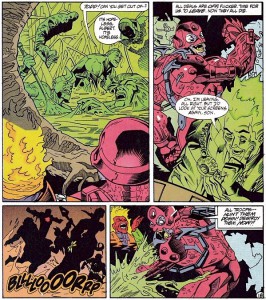 TGH: Meanwhile, the X-Men villains are watching the C-listers fail to escape the ship’s grasp, just in time for the mind meld to work and puke them out. Flicker finds this hilarious.

BW: And as previously mentioned, Flicker’s name really does look like something else entirely with this font. The substitution DOES work in context though! 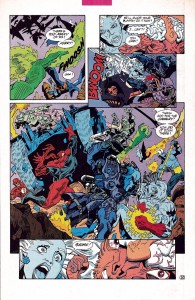 QP: Some flyers come in to attack them, but the B-team shows up just in time to help out. Then, the ship baby decides to blow up the rest of the armada, and the sky looks like someone puked Froot Loops. 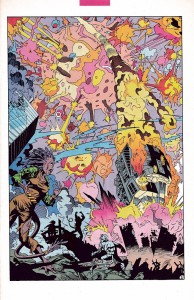 DN: So I guess they saved that almost-blowed-up planet?

TGH: The planet doesn’t blow up, and it looks like there are at least a handful of people left to begin the highly-incestuous re-population process. 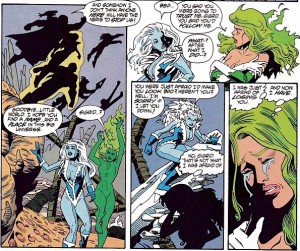 DN: Martian Manhunter rallies the troops to go find a ship to hotwire. Meanwhile, Icemaiden gives some final encouragement to monster baby planet ship, and then shoots Fire the bird for being a shitty friend.

QP: Fire actually gives Icemaiden shit for saving all of their lives, and that entire planet. Fire, get over yourself.

TGH: Fire makes one last attempt to put Icemaiden back in line, but it’s too late for their abusive relationship to last.

DN: And then Bea goes full ’60s romance comic and cries her eyes out.

QP: She’s crying like she doesn’t even care if she drowns.

BW: I’m blaming Yaz for all of this, by the way.

TGH: This is where the issue ends, because they don’t care about what Hawkman’s up to, just like the rest of us. They told their story, and it’s not their problem anymore.

QP: They do at least draw the saddest little pooping Hawkman cartoon in the next issue blurb, though.

TGH: Will the JLA find Guy Gardner? Is the JLA even looking for Guy Gardner? And what kind of Thanagar bullshit is Hawkman going to get us into now? Find out next time!

TGH: We’re back to repeats of ads in this issue, so we don’t get to make fun of any, I guess!

TGH: Next week, Hawkman goes back to Thanagar to find out where Guy Gardner is for some reason. And then he leaves Thanagar, vowing never to return until they head back to Earth and he wants to collect some exotic rocks.