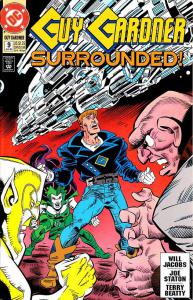 TGH: Welcome back, honorary Gardners of the Universe! This week, Guy Gardner is apparently surrounded! Can’t we just have a normal title like the good old days?

DN: Will Jacobs takes over as fill in writer, or full time?

QP: I think he’s actually been the script writer for the last few issues, with Jones just plotting.

TGH: The last time we left Guy, he had spent the entire issue getting beaten up by Lobo, then he gave Sally money to start an escort detective agency. I’m not sure of that can be topped Of course, this issue begins with Buk-50 straight-up dragging a Servbot corpse into Guy’s apartment, so we’re off to a good start! 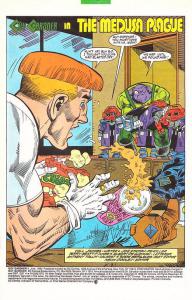 QP: Guy just can’t catch a break. Can’t even finish his Chipz and lager before the Servbots are back on his case. 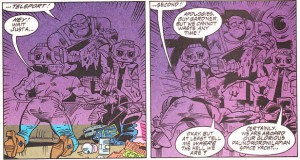 TGH: In a twist that’s a first for this series, there is no time to explain what they need Guy for! They teleport him right onto the ship and fly off somewhere. Guy did not get to bring his beer, either.

QP: Something attacked one of the Servbots, and they need Guy to investigate. Because the guy with no powers is definitely the best person to be doing that. 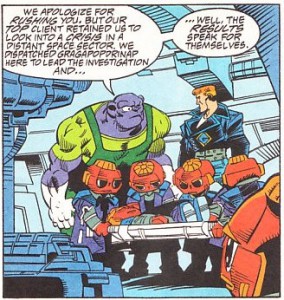 TGH: No time for Guy to say he has no powers! Into the transport box!

QP: Even tho they know that since they bought his ring off him. 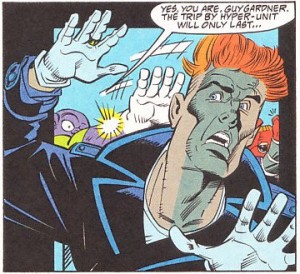 TGH: They would’ve saved some time installing one of those boxes in Guy’s apartment instead of teleporting him to a ship first, just saying.

DN: The Gardners of the Universe are crapnipotent. They know crap.

TGH: Guy and Servbot 73 arrive on some planet and are greeted with explosions! For another series first, Guy does not want to just run towards the explosions. 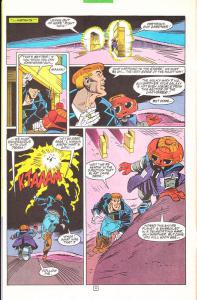 QP: One of the little Servbots leads Guy towards the explosions to show him that the planet is at war. 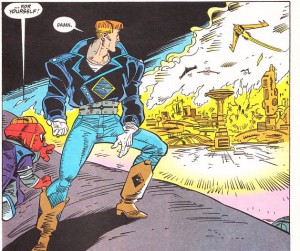 TGH: Or at least one city on the planet is at war. I feel like they kind of missed the scale of what an entire planet at war would look like. Apparently this has happened on other planets too, so Guy needs to use his not-ring and his not-brains to find out why.

QP: Fortunately the Servbots have assembled a crack team. Oops, did i say crack? I meant crap. 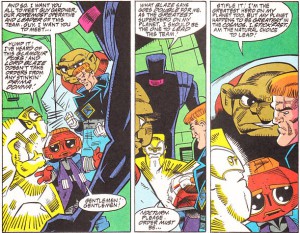 DN: It’s what they know.

TGH: The Gardners have assembled a team of other asshole superheroes from other planets. Servbots have a type. Guy, who has no powers, is supposed to be their leader.

DN: Guy gets to team with an intrepid team of misfits like “light guy” and “dark guy!”

QP: All the random dudes get into a pissing battle to take over leadership. 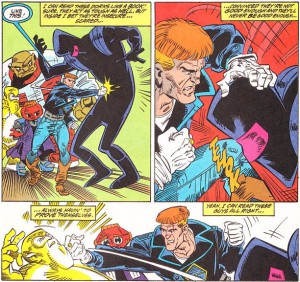 TGH: Guy hits them all to put them in their place, like heroes do. Or animals, I forget.

QP: Meanwhile, the war comes directly to them. 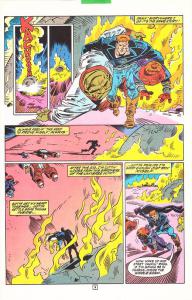 TGH: You’d think being blown right the hell up would be a big deal, but Guy just takes it as an opportunity to be sad about himself, even though he was the only one left standing, even without any powers. I’m going to have to guess that there’s going to be a focus on his feelings in the near future.

QP: I really think he needs a good therapist. He is internalizing way too much stuff.

TGH: I wonder what The Question is up to? 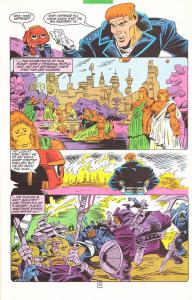 TGH: Servbot comes to after the explosion and explains more about what is happening. Apparently this planet was Kashyyyk before everyone suddenly went crazy and started trying to blow each other up. 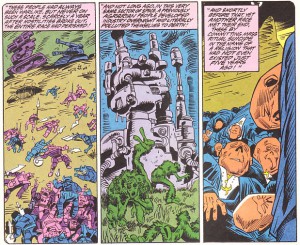 QP: This was once a peaceful planet of Grecian orangutans until one day they weren’t. Similar wars have broken out on other planets for no reason. And other weird stuff like that. 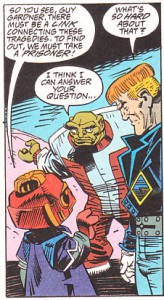 TGH: Guy’s mission is apparently to get one prisoner from the war planet so they can get some info. Luckily, a bunch of them come by with a tank. Then Guy and friends get blasted by it. Not a good way to capture someone. 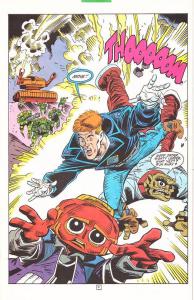 QP: Especially when their teammates seem determined to kill them all.

TGH: Rando hero #1 gets zapped, so rando heroes #2 & 3 lose their shit and start trying to murder everyone. Again, not a great way to capture one person, which is your only goal. 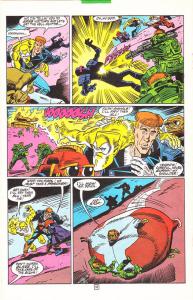 QP: Guy tries to rein them in, which goes over about as well as you’d expect. 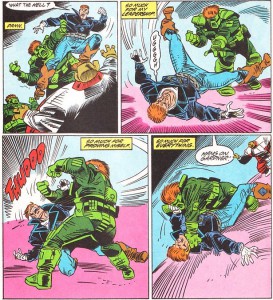 TGH: Guy gets jumped by a bunch of Wookiee Star Lords. I really think someone would rather be working on Guardians of the Galaxy, and not DC’s knockoff brand. 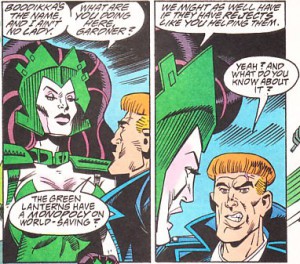 DN: Guy and Boodikka get along super great.

QP: Boodikka is now a lot sexier and more scantily clad than she was back in GG Reborn. For reasons, I guess.

DN: Still about a foot taller than Guy.

TGH: Guy is super sexist to her because that’s what he does, so he gets punched pretty hard. He still decides he gets to punch her back though, because men’s rights or whatever. 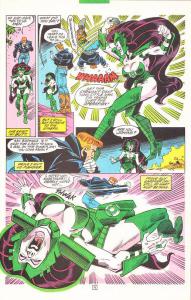 QP: And then he suddenly comes to the realization that getting smacked by Green Lanterns recharges his ring. 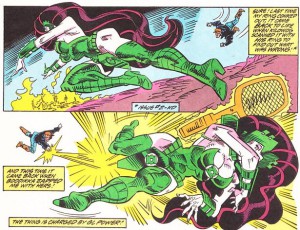 DN: Which, if you’re Sinestro or the Qwardians, not the worst idea.

TGH: Yeah, really. If you’re going to fight Green Lanterns all the time, why not make them recharge your ring for you? It’s the ultimate troll weapon.

TGH: So now to recharge his ring, he gets to be a bigger dick to her to make her mad. But on the plus side, she gets to hit him more. 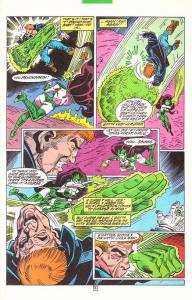 DN: Of course, in this issue, he uses that power to dress Boodikka up like a go-go dancer. Because, Guy Gardner.

TGH: Yeah, really getting to the bottom of this mystery, Guy. Women, amirite?

QP: Fortunately, Boodikka punches him into a plot point. 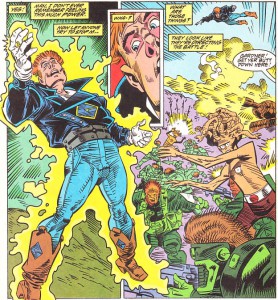 TGH: Guy’s ring is fully recharged! Oh crap, everyone else has been down there fighting this entire time!

QP: Some weird Medusa-looking things are in the middle of the fight, and nobody seems to be able to see them. 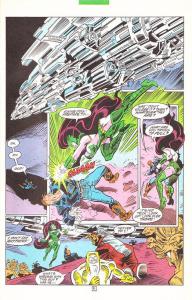 TGH: Guy looks up and sees a huge spaceship hovering overhead too, but nobody see that either. 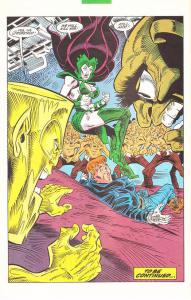 TGH: Then, all of the sudden, everyone wants to kill Guy! Though, frankly, I don’t know if that’s a plot point or not.

TGH: That’s what the book should be called.

TGH: Will Guy solve the mystery of the invisible Medusas? Or will he just be beaten to death on the spot? Tune in next week!

QP: Probably, since he didn’t bring Sally to solve the mystery for him.

TGH: Sally would have at least thrown one in the beginning of next issue.

DN: She’s too busy rocking the best business model in Times Square. Escort: PI, coming soon to a better Earth than this one. 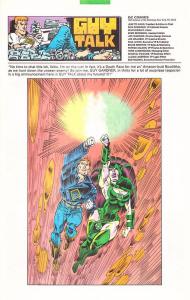 TGH: This week in letters…NO TIME FOR LETTERS!

DN: LETTERS? FUCK THAT! Guy and Boodikka got shit to do. 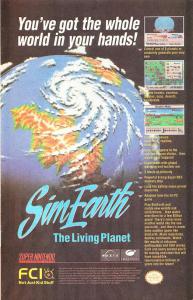 TGH: Did anyone play SimEarth? I did not.

QP: I actually did on PC. I vaguely remember it being fun. 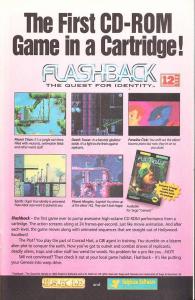 DN: I think I played Flashback…

TGH: It’s a CD ROM game in a cartridge! I played Out of This World but not Flashback.

QP: Whatever that means. 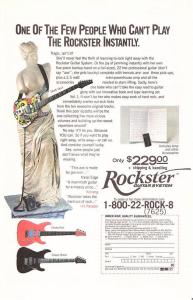 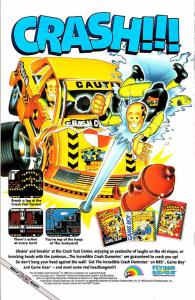 QP: I kinda forgot about Crash Test Dummies being a thing. At least, the non musical ones, anyway.

TGH: Yet another (probably bad) LJN game being advertised in this comic. LJN and Guy Gardner go together like something terrible and something else terrible. 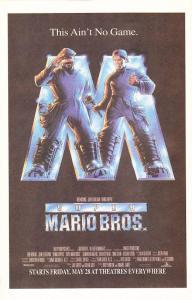 QP: Nope! I enjoyed the hell out of that movie back in the day

QP: I mean i know all the cool kids hate it but fuck the hipsters.

DN: Mojo Nixon was Toad, which was great. 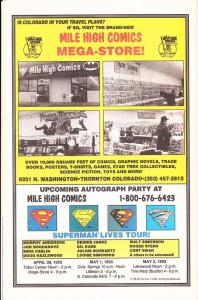 TGH: “Is Colorado in your travel plans? No? Well great, this ad was not cheap.” I know that sign doesn’t say Rape Books, but it kind of looks like that sign says Rape Books.

DN: Steer away from Colorado, kids.

TGH: Next issue: Guy gets beat up some more and has some more feelings.

QP: Guy starts a Tumblr to discuss his feels.

DN: No one follows.

TGH: Gnort responds to every one of Guy’s posts with “LOL.”