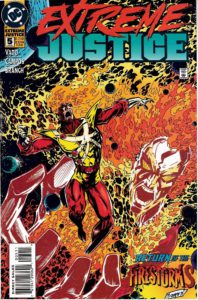 TGH: Welcome to the next issue of Extreme Justice, an Extreme Production.

TGH: Last time, the team, with the exception of Maxima, who sulked in her death tower, and Captain Atom, who was there the entire time but was completely useless, saved Firestorm from setting Pittsburgh on fire. But now, Martin Stein, Firestorm’s old acquaintance and a fire elemental, is coming to Earth to create even more fire! How will they get out of this, their 6th consecutive fire-based crisis?

BW: Space is a vacuum. Fire can’t burn in a vacuum. But here we are.

TGH: I guess it’s Firestorm’s time to shine as it is now his turn to be menaced by a giant fire Lobo face. How is there Cable flare on planets?

TGH: Also those planets between Firestorm and Stein’s thumb are tiny.

QP: Or maybe Stein is just that big!

TGH: Maybe. Maybe his palm is huge and gets larger the further away it gets.

DN: Also, there are multiple Firestorms, as indicated by the spray painted S in the title.

BW: The Firestorm Matrix has evolved beyond puny internal organs.

QP: Pecs is all you need. 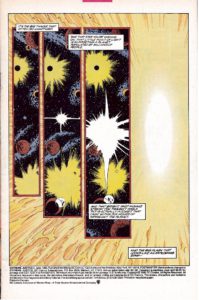 TGH: Everyone else at least had some kind of meaningful exposition when the issue was supposed to be about them, but this one just opens with some boring crap about space and whatnot. I mean, I guess it’s leading up to talking about Stein coming to light everyone on fire, but it’s still not particularly captivating.

QP: These guys are no Carl Sagan.

BW: Yeah, pretty sure Sagan never compared a comet to a 747.

QP: Billions and billions of 747s. 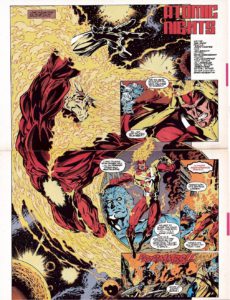 TGH: Captain Atom thinks Firestorm is talking to himself, but he then starts giving us that sweet, sweet exposition I was expecting on the previous page.

QP: Firestorm’s entire thing until recently was that he was two consciousnesses merged in one body, so you’d think it really wouldn’t be that weird that he’s talking to himself. Unless you’re just trying to be an asshole, but surely that’s not it.

TGH: Captain Atom did not once try to learn what his deal was.

QP: That would require caring. And Captain Atom is not interested in your hugbox “caring” bullshit.

DN: Captain Atom is too busy to care. He probably thinks Booster is a robot man.

BW: And Ted is part arachnid.

QP: And Maxima is the largest there is.

TGH: And that Oberon is Mister Miracle’s baby.

DN: Or that all black people can absorb energy. I mean, he’s only met the one.

BW: Or that anyone likes Captain Atom. 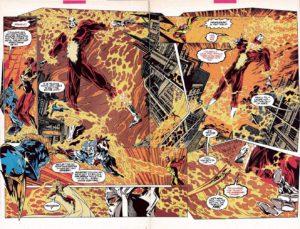 TGH: Suddenly Dr. Stein appears, and RIP everyone in Pittsburgh.

QP: The P stands for Pittsburgh. In fairness, he is Galactus-sized, so RIP in Cleveland, too.

BW: Lee Loughridge had the easiest job in comics for the past five months. Just set everything on fire. All the time.

TGH: Captain Atom makes a point to let us know that if he touches ground everyone is screwed. He is standing on the ground in the very next panel. Come on, guys. Stein just wants Firestorm to know how awesome his space vacation was after he took a bunch of drugs.

QP: Did he go to Space Amsterdam on spring break?

BW: Yep, because he’s not shutting up about it. 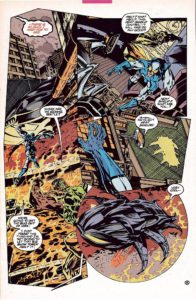 TGH: The page count was a little low on this one, so please enjoy an exciting mini-adventure where Beetle doesn’t know the Bug has a heat shield and then it does in fact have one The End.

QP: Amazing-Man can read the buttons, thank God he was there and not, say, absorbing the space fire.

DN: They basically had to force him to absorb Ronnie, so I imagine Stein has him shitting himself. 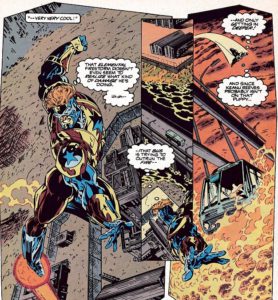 TGH: Booster knows he really can’t do anything, so he does some air flexes and notices a bus in distress. It’s nice to see at least a few of our heroes do some actual heroing every once in a while. 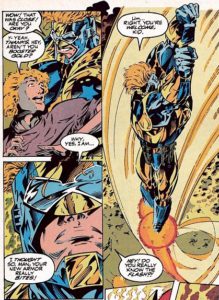 QP: Booster saves everyone on the bus, and someone thanks him by telling him how stupid his new look is. It could only be better if someone called him Green Lantern.

DN: Someone actually recognizing him is such a win.

TGH: That kid knows more about the DC Universe than the cop Oberon was talking to last issue, which kind of says a lot about this universe in general.

QP: You’d think they’d have briefers at the academy about that. 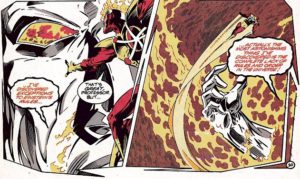 TGH: Meanwhile, Firestorm is still trying to convince Stein to move his flaming ass, but he’s still too high to notice.

BW: “Our camp had the best giveaways on the Space Playa” is something that Martin Stein probably said.

TGH: I don’t think Stein’s actually as smart as he thinks he is. 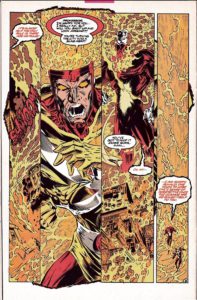 TGH: I do like that Ronnie finally just loses his shit on this asshole. Stein apologizes but then still blames it on being too enlightened to care about being an asshole.

QP: In fairness, who hasn’t had that kind of moment while fucked up on cosmic acid? 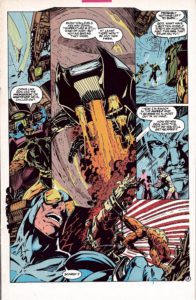 TGH: Page count is still low, so please enjoy another mini-adventure with Amazing-Man being scared to die again. This is pretty much half of the team just sitting on the sidelines crying.

BW: I’m beginning to think Maxima had the right idea with the last two issues.

QP: She would’ve just punched Stein into the sun already. Or tried to bang him. Could go either way.

TGH: Stein wants to merge with Firestorm again, probably so he has a second stomach for Taco Bell. Firestorm is not a fan of this idea. 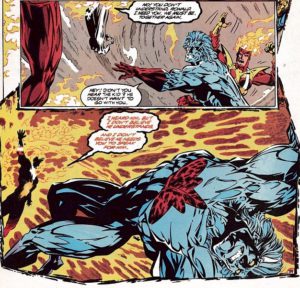 TGH: Captain Atom’s entire contribution was getting slapped. I can dig it. Stein takes Firestorm into space so we can have a few pages without the titular characters. 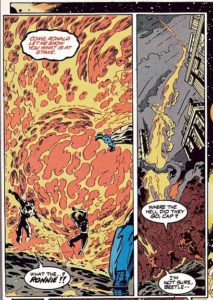 QP: He tries to convince Ronnie to join him at his space flop house, but Ronnie is a D.A.R.E. graduate and knows when to say no. 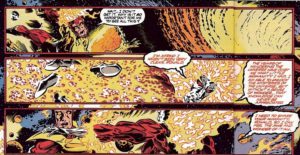 TGH: Stein has see some amazing shit, but he lost his humanity, so he can’t even sit back and be wowed about how amazing the universe is. He wants to steal Ronnie’s entire being so he can enhance his high. That is the entire reason he came back to Earth.

QP: If he hasn’t been wowed then what the fuck was all that shit I just read? 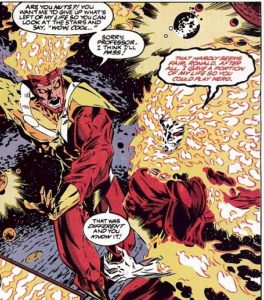 TGH: Ronnie tells him to fuck off, then Stein gets all mad because he totally owes him his soul because he helped him that one time. 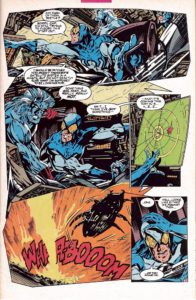 TGH: Page count is still short, so please enjoy a third mini-adventure about Beetle looking at a radar until the important characters show up again.

BW: Has anyone told Maxima?

DN: So are my toenail clippings.

TGH: Luckily they appeared right in front of the Bug, so this scene was 100% unnecessary. 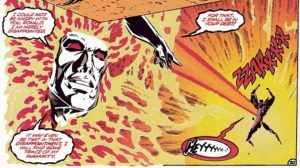 DN: So Stein isn’t mad, just disappointed. Like your dad.

TGH: I’m sure that this is entirely unintentional, but Dr. Stein lays down history’s sickest passive-aggressive burn. “I’m not angry, just disappointed. I am unable to feel, but perhaps my disappointment in you will be so great that I can once again remember emotions. For that I owe you, I suppose.” It takes an immortal space god to lay a burn that sick.

QP: Well he is an elemental of fire. 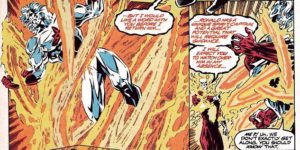 DN: Stein forces Captain Atom to take Ronnie. Like, you have no choice whatsofuckingever, take this shitty teen off my hands. I will be watching you, you silver skinned prick, deal with it.

TGH: What a hero to have to be threatened by a god to not be a shit to someone. 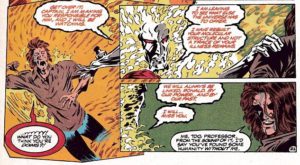 QP: But first he passive-aggressively cures him of cancer. Quick, everyone on earth with cancer, go be a huge fucking disappointment to a space stoner! 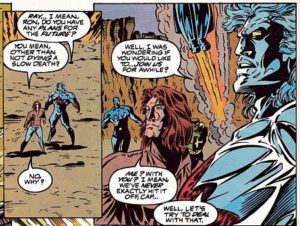 TGH: Captain Atom tried to play it off like he totally had this great idea that Ronnie should join the team.

DN: Instead of a space fire god holding a gun to the back of his head. 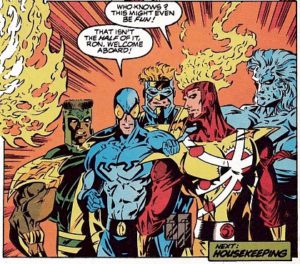 TGH: The issue ends with Firestorm joining Extreme Justice. Now there are two cancer-producing radioactive men on the team. Beetle puts his hand on Firestorm, signing his death warrant.

QP: Next issue is just the two of them fighting about Nuclear and Nucular.

TGH: The next issue promises some housekeeping, a staple of all hero comics. Will Beetle wipe down the computers properly? Will Amazing-Man manage to come up with an address that the garbage collector can find? Who’s in charge of dusting the Neighborhood’s giant fake ceiling? Tune in next time presumably on Extreme Justice!