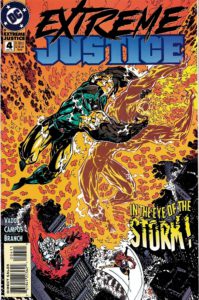 TGH: Welcome back to another exciting Extreme Justice adventure!

TGH: Last week finally, FINALLY wrapped up the invasion and occupation of Mount Thunder storyline, but there’s no time to relax, as Ronnie Raymond has fire cancer! And judging by the cover, our heroes making this entirely their business, and it’s up to Electric Amazing-Man to stop him!

DN: Amazing-Man has all of the powers.

TGH: He gained the electric power from peeing on an electric fence.

BW: As opposed to “Touching A Fire Extinguisher.”

QP: Eventually everyone in this book will get the Phoenix Force.

TGH: Not to keep knocking on this cover (j/k) but look at Ronnie’s right thumb!

BW: Well there’s some nightmare fuel for me.

QP: At least Captain Atom’s fire is a different color. 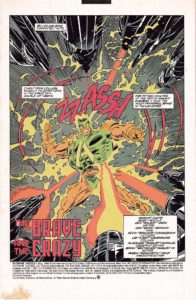 TGH: Clearly the focus of this issue is supposed to be on Amazing-Man, as further shown in the opening, where we get some exposition while watching him get shot with a ton of lasers. What more could you ask for, really?

QP: That’s a bit much, lets be honest.

QP: It looks like they actually did get a guest penciller for this issue, but credited the regular guy on the cover. Good job guys!

DN: Hey, Amazing-Man survived Everest! So, he did better than the guys in that movie. 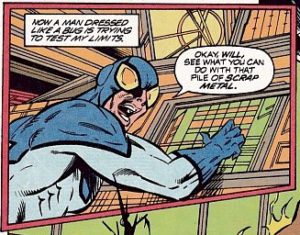 TGH: Beetle is running some tests on him. For God’s sake, can he just stand at a computer terminal and press buttons, and not hug the thing?

QP: Computers have feelings too. 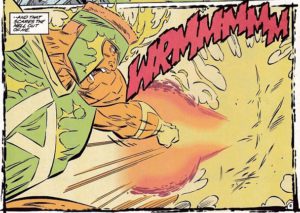 DN: And then Beetle has Will just blow up some scrap metal? Like, try harder, maybe?

BW: At first I assumed he was going to absorb the qualities of the metal. But no. ‘Splosions. 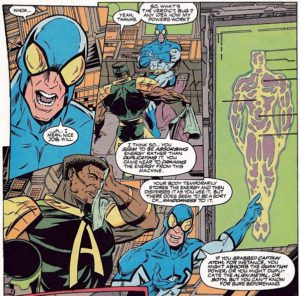 TGH: Beetle determines that Will’s powers are absorption-based instead of copy-based. I’m curious how long they’ll stick to that narrative and not completely forget about it in a few pages. Also he mentions that the absorption properties are random, just to allow appropriate narrative cushioning.

QP: Well, he was on fire a few panels ago.

TGH: Is he uncontrollably gaining the power of his own sweat or are there limits? Beetle needs to run some more tests.

QP: Why is Beetle wearing Amazing-Man’s belt all of a sudden?

TGH: They were cheaper in bulk. 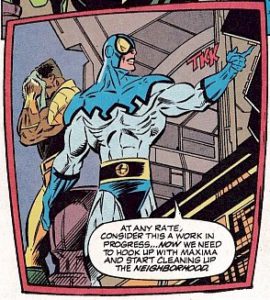 BW: “At any rate, consider this a work in progress…now we need to hook up with Maxima and start cleaning up the Neighborhood.” Phrasing, Beetle!

QP: After the last few issues, I can’t imagine what their idea of cleaning up is.

TGH: Meanwhile, Captain Atom is searching the Internet when Maxima walks in. WHERE IS YOUR HAND ADAM???

QP: Putting your suit back on only makes you look more guilty, Atom. 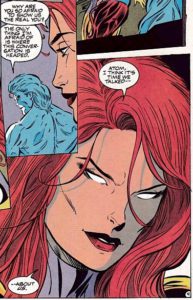 TGH: Maxima wants to talk about their relationship. The fact that she walked in on him looking at pornography and is still pressing ahead undeterred says a lot about her.

BW: Maybe she couldn’t see it. Not having pupils and all.

QP: Maxima tries to have the “we’ve been on three crime-fighting outings together now…” conversation with Atom. It doesn’t go well.

DN: Maxima’s defining character trait is that she’s DTF if you show any semblance of power. Look out, Amazing-Man. 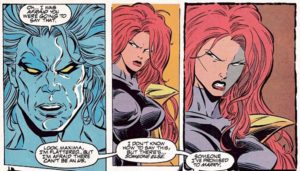 TGH: Captain Atom is just like “Oh yeah, I’m engaged, did that not come up until now?”

QP: I totally have a girlfriend. She’s a supermodel. In Canada. You’ve never heard of her.

TGH: Maxima obviously does not take this very well. 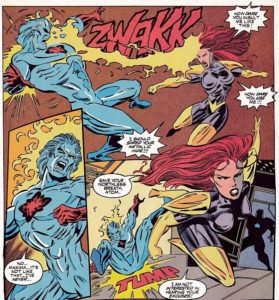 QP: Honestly she takes it better than I would’ve thought.

TGH: Like, clearly she was interested in him this entire time. Maybe don’t be a dick and instead randomly insert “my fiance” into a conversation early on.

QP: Yeah, maybe don’t wait till the come-to-Jesus moment to tell the sex-crazed, overpowered lady that you can’t bang her.

TGH: I do appreciate that she could clearly rip him to pieces if she wanted. Maybe she should be the leader.

DN: DTF decision making is not a leadership quality.

TGH: Back in The Neighborhood, the area that they destroyed that one time, Beetle and Amazing-Man are trying to figure out how to pick every piece of debris up with their bare hands. I thought Ted was smart.

QP: Maybe Will could absorb the powers of a magnet?

DN: But how do they work?

BW: Ted was smart. He waited for Maxima to do it for him. She’s clearly more competent at everything than anyone else on the team.

QP: Except banging computers. Beetle is the World Champ at that.

DN: Beetle is DTF any gadget in his vicinity. 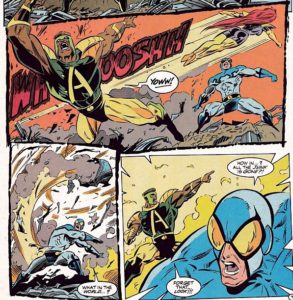 BW: What a terrible world we live in.

DN: We’re not that lucky.

QP: Because ladies are all crazy when they get emotional.

TGH: Luckily for Ted and Will, Maxima somehow managed to pick everything up when she flew by and turned it into Kefka’s tower.

QP: It also looks rather remarkably like the pile of scrap metal that Will blows up at the beginning of the book.

TGH: Captain Atom shows up and makes things better by screaming that he demands Maxima act like a rational human being. 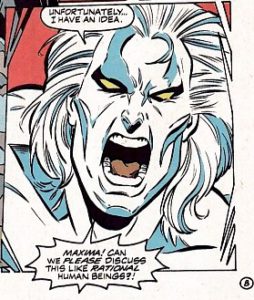 QP: I like that screaming at her is his entire plan.

BW: I can state for the record this plan NEVER WORKS.

DN: Which, to be fair, she straight up says she isn’t rational.

QP: When someone builds a fucking necromancer tower to get away from you, loudly questioning their rationality is perhaps not the best plan of attack. 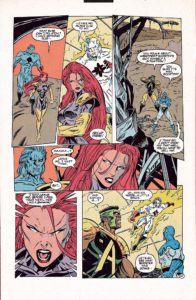 TGH: Beetle gets a call from Booster about some kind of emergency. Maxima decides she’ll be staying in her monument to non-existence for this case. 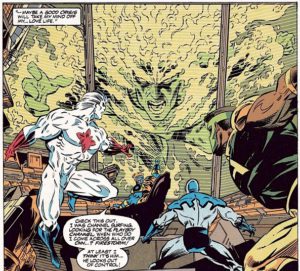 TGH: Booster accidentally found the news instead, and apparently someone is destroying Pittsburgh in a fire storm. Booster wonders if it might be Firestorm.

BW: Captain Atom notes that he never got along with Firestorm: The Nuclear Man. TBF, no one likes you Captain Atom. 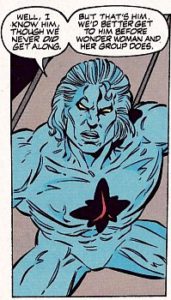 TGH: He makes sure everyone knows that they’re not friends, but also notes that he has to help him before Wonder Woman and the Real Justice League help him. Really hitting it out of the park this issue, Atom. Who else can you be a complete shit to before the issue’s end?

QP: Aren’t they in the Rockies and Wonder Woman and her team in New York? Logistically speaking, time is not on their side. Atom decides he’s really got a hankering for Primanti Brothers, though, so they go try and figure out how to get to Pittsburgh.

TGH: Since Maxima can’t carry them to Pittsburgh with her mind, they suddenly realize that they have no way to get anywhere, a contingency that has never come up until now. 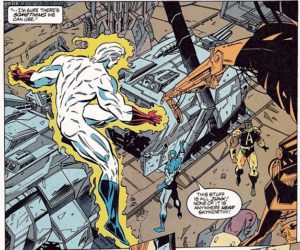 BW: Captain Atom wants to steal some aircraft or other. From home invasion to car jacking. Your Justice League Extreme, ladies and gentlemen. 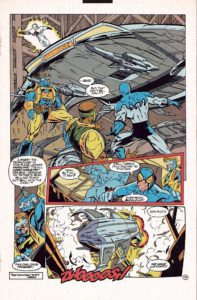 TGH: Beetle complains that everything there is broken shit, but, WOULDN’T YOU KNOW IT, there’s a working Bug in the hangar!

TGH: What a fucking coincidence! Beetle’s dad sold a bunch of technology to the same shadow government that was operating in the same base that Beetle and his friends stole last week! What are the odds???

TGH: I’ve read some unnecessary shit for this site already, but you can not get me to read Showcase ’94 #4 to read a throwaway line about a guy selling some stuff to some people

QP: What, you don’t want to know more about Ted Senior’s side job as a weapons monger? 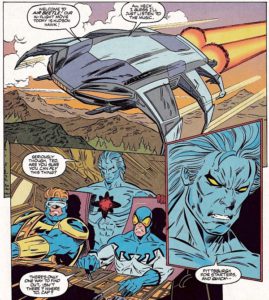 TGH: Captain Atom starts giving Beetle shit about whether or not he can fly the Bug while he’s already clearly flying it just fine. Jesus, Atom. Sit the fuck down.

QP: Atom is the king of negging.

QP: The team flies off to Pittsburgh, where Oberon is having a very hard time getting a cop, who lives in a world full of super heroes and villains, to believe that his friend just burst into fire and flew away.

DN: Oberon is about to beat the fuck out of a POLICE OFFICER for calling him short. 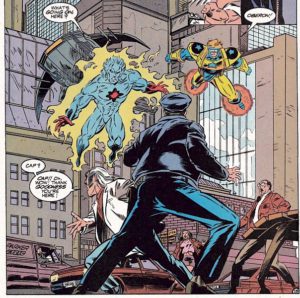 TGH: Oberon is seconds away from biting that cop and getting tased when the gang shows up and saves both of them. At least they’ve done something this issue.

TGH: Oberon tells Captain Atom about Ronnie Raymond, and how he used to be Firestorm, and now he’s been having cancer problems, and Captain Atom makes a point to interrupt him and mention that he is also called The Nuclear Man, actually. Fuck you, Captain Atom.

QP: I guarantee no one has ever called him the Nuclear Man.

TGH: I bet he pronounces it “Nucular.”

QP: And laughs to himself whenever someone says it correctly. 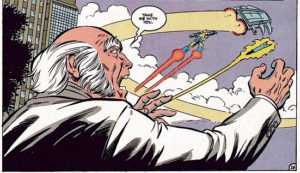 DN: Oberon is SO SAD when they fly off, and has a weak “take me with you” as he realizes Scott and Barda have abandoned him as supporting cast.

QP: It’s like they abandoned a puppy. A very angry, smelly puppy. Possibly with rabies.

DN: I mean, it’s like they abandoned a Danny Devito puppy. 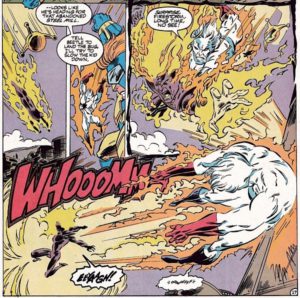 BW: They manage to catch up to Ronnie and Captain Atom continues to lead the team the best way he knows how. With punching. And badly.

TGH: Skeets finds Booster and tells him that Firestorm is out of control, which gives Beetle the idea of having Amazing-Man take a crack at him. Amazing-Man has a very heroic response. 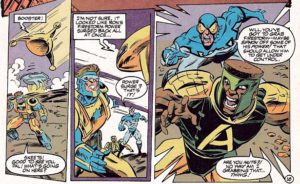 BW: That would, to be blunt, an emphatic “HELL NO!”

QP: Amazing-Man is trying so hard to be the Falstaff of this superteam. 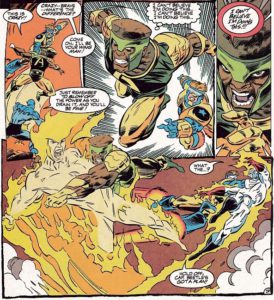 TGH: Booster and Beetle basically tell him to just deal with it, and try not to fuck it up, and then Booster FUCKING THROWS AMAZING-MAN AT FIRESTORM! I’m pretty sure Amazing-Man was not even prepared for that shit.

QP: Captain Atom has left it to the scrubs to actually come up with a plan here, which is why it’s actually working.

DN: Beetle has good ideas when he isn’t fucking the appliances.

TGH: Every plan they’ve had has been in Captain Atom’s absence.

QP: Everyone knows a good leader leaps in face first without thinking. 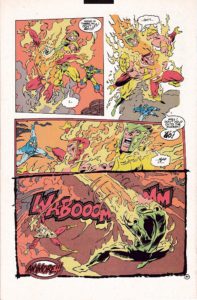 TGH: There’s some major character development as Amazing-Man manages to actually not fuck it up. Even he seems surprised.

QP: Beetle tells him to let go of the energy and he fires a radiation lazer out of his chest. 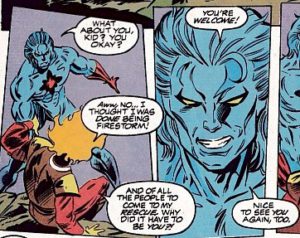 TGH: Captain Atom runs in and announces to Firestorm that he’s welcome, even though he himself literally did nothing.

QP: He ineffectually punched him a time or two.

BW: “Of all the people to come to my rescue, why did it have to be you?!” It’s true. No one likes Captain Atom.

TGH: It would’ve been Wonder Woman but SOMEONE put sugar in their gas tank.

QP: It makes you wonder why Atom was in such a hurry to get to him first since he CLEARLY doesn’t like him.

TGH: I bet Icemaiden could’ve handled this quickly and sexily.

TGH: Firestorm complains about a headache, and a voice in his brain.

QP: Pretty common side effects after nearly blowing up a major city. 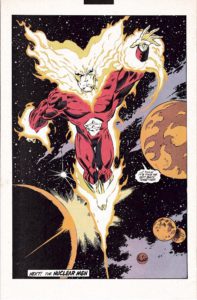 DN: Which is coming from Martin Stein, who is currently a fire elemental in space. Fuck all Firestorm stories.

TGH: Will Martin Stein, fire elemental, make his way to Earth, thereby complying with this comic’s style guide requirements that at least 30% of all pages involve flames? Is Oberon running frantically through the streets of Pittsburgh trying to make sure he’s not left behind? Tune in next time, same Extreme time, same Extreme channel.