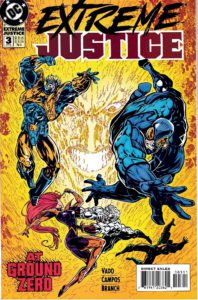 TGH: Welcome back to our most recent combination of text and art in DC’s honest best attempt to tell a story known as Extreme Justice!

TGH: Last week Captain Atom died and there was some fighting, but then he wasn’t dead at all and they are still fighting! What will happen today?!

BW: Will everything continue to be on fire? Will Amazing-Man absorb the powers of a fire extinguisher?

QP: That would make too much sense.

TGH: Let us begin with the cover, which brings us back yet again to the flames of fury, as Captain Atom is no doubt angry that Synge’s diabolical robots managed to best him, if only temporarily.

BW: Will Captain Atom give out the team building purple nurples?

QP: From the looks of it, the team gets attacked by a Weekly World News Faces of Satan special edition.

DN: Blue Beetle looks like he did all of the steroids. Whatever the problem may be, I imagine Beetle can bench press it.

TGH: Weep in empathy at the sneering face of Synge, mocking our team from behind the flames. Feel the emotion in Blue Beetle’s face as he tries to thwip, though there is no thwip to be found.

BW: Feel the angst as Booster tries to remember if Iron Man was good during this era!

QP: Gaze in ennui as Amazing-Man is just kinda there!

TGH: Revel in the real-world parallels of Captain Atom, the leader of the team, going out of his way to protect Maxima, by far the most powerful member, while those with less power suffer alone.

TGH: Would that I could find a frame worthy of holding this masterpiece.

QP: I’m sure there’s some frames at the landfill. 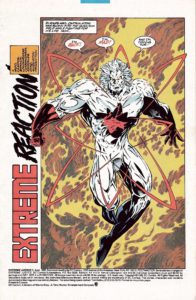 TGH: Anyway, on page 1, Captain Atom is missing his penis and is NOT HAPPY ABOUT IT.

QP: That is some extreme Ken Doll action, there.

TGH: The writers go ahead and place his time jump at 24 hours, so that nuke in issue 0 that sent him like 30 seconds into the future must have just been a practice nuke.

QP: It still had the training wheels on it.

TGH: Amazing-Man wants Captain Atom to call time out and explain everything. Luckily Booster tells him to shut up and absorb his suit so he can krang a robot. Though really, Booster could’ve done that himself.

QP: What’s Amazing-Man been running as all this time? Just a normal powerless dude?

BW: I thought it was a chunk of burning wood?

TGH: Synapse tries to escape (and now everyone knows his name for some reason), so Captain Atom straight up smashes him into the ground and breaks his face open.

QP: Spoilers: it’s not a robot!

TGH: I feel like maybe Synapse should’ve taken a deep breath and remembered what his powers are. Like, maybe blast everyone in the brain while you run. 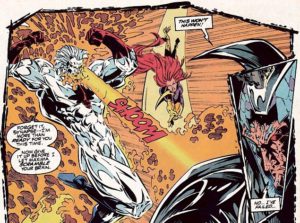 TGH: Synapse tries to make a move against Captain Atom, but he gains the upper hand by firing cheese out of his chin at him.

BW: Synapse *is* lactose intolerant after all.

TGH: Can Captain Atom fire face lasers? This seems like a new one.

QP: I don’t understand why Synapse looks like he’s got the techno-organic virus.

DN: It was the ’90s. Even I had the techno organic virus back then. It was rough. Itchy.

QP: That must be where Morgellons comes from.

TGH: Finally, Amazing-Man catches up and demands to know what happened. Atom explains that he has lept forward in time 2 or 3 times in his life, two of which happened in the last few issues of this very comic! 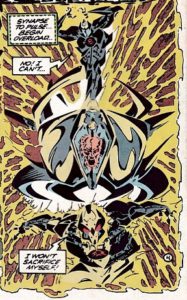 TGH: Synapse orders the new guy to blow himself up, but wouldn’t you know it, he refuses!

BW: Jones is having the BIGGEST case of “I told you so!” from beyond the grave.

QP: Synapse gets all pissy about Pulse disobeying orders, despite the fact that Pulse told him he wasn’t programmed to obey orders.

TGH: Maybe Synapse is programmed to be an idiot.

QP: Beetle asks what these weird half-robot half-dude things are. Pulse immediately leads off by telling him they’re sexless. That’s…not exactly what he asked.

BW: That’s enough for Booster though.

TGH: Captain Atom gets really pissy about it, as if he’s been there.

QP: We did get a good look at his non-bulge earlier. 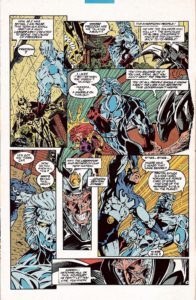 TGH: Then all of the sudden, Synapse, and not the robot with free will, just goes ahead and tells them everything. Gives away Synge and everything!

BW: Which pisses Captain Atom off to no end.

QP: Synapse starts going on about the conspiracy, but again, no one bothers to explain what it is. This shadowy government organization sounds like Facebook posts from your uncle that follows Infowars.

TGH: Bear in mind we are now 4 issues (and a ton of damage to government property) in, and only now does our team actually have any reason to suspect that something bad is happening here. 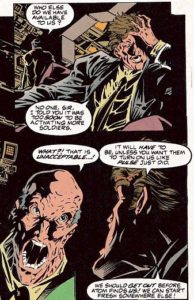 TGH: He’s nursing the worst previously-dead hangover. I love that Synge was not even paying attention to him the first time about not activating the robots because he’s mad for the first time all over again.

QP: I don’t really understand why people in this book turn into vampires when they get really angry.

BW: I appreciate that Jones gets to say “I told you so” in person. So there’s that. 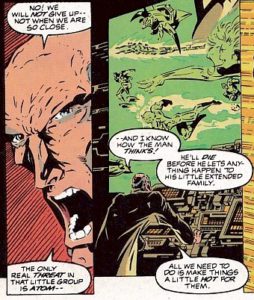 DN: Also, the only real threat is Atom? Really?

QP: Well, Maxima hasn’t really been doing too much these last few issues. 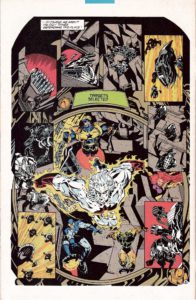 TGH: There hasn’t been a boring fight in a long time, so a bunch of hench-tanks show up. 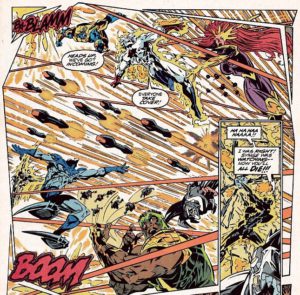 QP: There hadn’t been any fire for like three pages. It was almost a record.

BW: That’s three pages of synopsis for you. 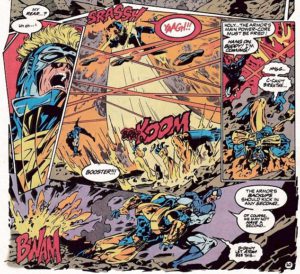 TGH: Then Booster gets shot right in his life support system and tells Beetle to hide it from Atom somehow.

DN: Kind of a shit place to have a weak spot.

QP: Atom seems like the kind of guy who’d fire you if you had to go on disability.

TGH: I mean, Amazing-Man is on the team so he can’t be that picky. 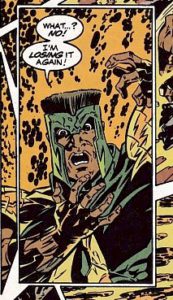 TGH: Speaking of Amazing-Man, he loses control of…whatever the hell he was in control of this time. It looks like he lost control of just standing there.

QP: Maybe they should bench him for a few fights. 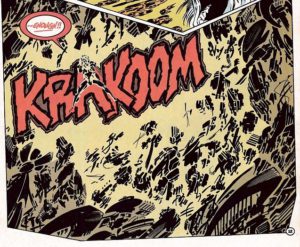 QP: Atom finally just gets pissed off and blows everything up. Not sure why that wasn’t his initial plan of attack…

TGH: I’m going to pretend that Captain Atom blew everything up because Amazing-Man’s bullshit drove him over the edge but I know we just hit whatever page count they were going for.

QP: Captain Atom is finally turning this car around.

TGH: Captain Atom assures everyone that as long as he needs to eat he’ll keep these shit heroes around. 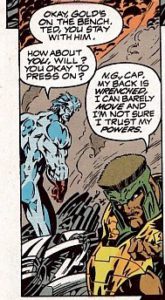 DN: This is probably the only time a hero backed out of a fight with a wrenched fucking back. 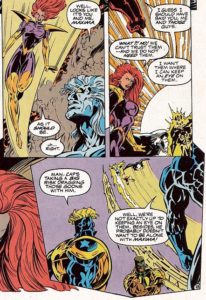 TGH: Since everyone sucks, Captain Atom, Maxima and the robots go on without them. This is their first mission.

QP: Maxima argues that the robots should stay behind with the guys who can’t fight. Although Atom clearly takes the robots as chaperones in case Maxima gets grabby.

BW: Our heroes, ladies and gentlemen.

DN: Well, Maxima can never know about his no-penis situation.

TGH: He can shoot beams out of his mouth so he’ll do okay. 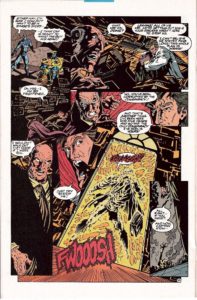 TGH: Meanwhile, Jones has had it with this shit and gets ready to walk out and grab an Uber home.

DN: I’m sure that goes well.

BW: I question his devotion to Sparkle Motion.

QP: Synge gets all pissy about it and then fries Jones as soon as he walks out the door.

QP: My personal favorite part of this is that the door to Mount Thunder has a lovely lunette over it. They may not be good at interior design, but they will have a nice window, dammit.

TGH: Atom and friends find the Hot House, which is mostly some grey shit with a few pods in there to save time.

QP: Pulse ceases to be drawn as an actual robot and instead as Warlock from the X-Men. 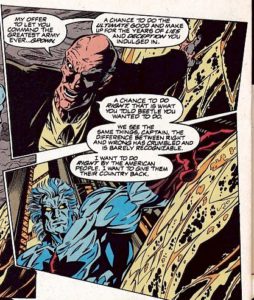 TGH: Synge appears and does the old “join me” speech.

BW: Is Synge Darth Vader or Atom’s father or both?

QP: Synge tries to convince Atom to come help him fight the shadowy government conspiracy, again without ever bothering to explain what the conspiracy is.
“The government is eeeeevil.”
“Howso?”
“Uhhh…just trust me on this.” 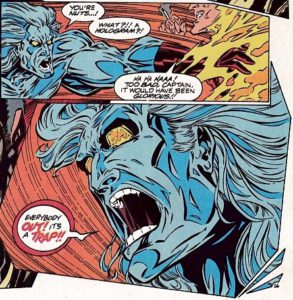 TGH: Captain Atom apparently tries to shove Synge down the stairs, which reveals him to be a hologram. 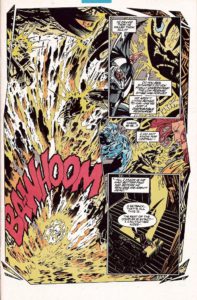 TGH: It turns out that Synge rigged the entire Hot House to explode, which does not, in fact, hurt anyone and completely destroys his army. I’m starting to think that Synge is just a senile old man and that the team is still a bunch of jerks for fighting him and not taking him to a retirement home where he’ll be safe.

QP: But he blew up the other robots, which is somehow enough to deprogram Synapse.

TGH: The robots have no idea where Synge is, which was not worth making a plot point because Captain Atom comes strolling into his lair literally seconds later.

BW: Not sure who seems less surprised: Synge or Captain Atom.

TGH: Bet you wish you hadn’t wasted that electrocuting door on Jones, huh? 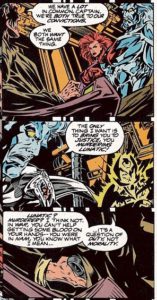 TGH: Synge draws from the “we’re not so different, you and I” cliche playbook. Also ‘Nam.

BW: Which feels like it’s about ten years late at this point, but EH! 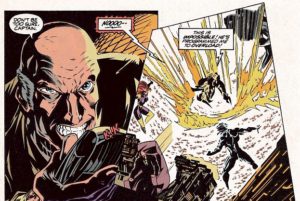 QP: Synge somehow triggers Pulse to overload, and then decides to slowly roll his chair on rails out of the building. 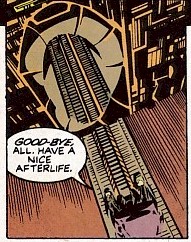 TGH: What would even stop everyone from just following him out of the tunnel?

DN: This book doesn’t bother with logic, it would seem.

QP: Well fortunately they gave Synapse a plot conscience, so he attacks Synge. Actually, I guess it’s Pulse that grabs him, although it’s very hard to tell because anything that’s not fire on this page is badly drawn. 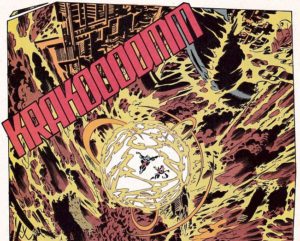 QP: I don’t know why Maxima was freaking out about what they were gonna do when Pulse exploded, and then she just made another force bubble like it weren’t no thang.

BW: They do however use my favorite sound effect, “KRAKADOOM!”, so there is that. 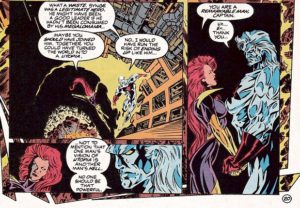 BW: On the upside, Synge gets a lovely eulogy from Captain Atom. Meanwhile Jones in the afterworld can’t even.

TGH: Atom gives us the stereotypical hero speech about how he would’ve been corrupted if he had joined Synge. I don’t think there’s an original idea in this plot. Maxima totally buys it, though, having not been exposed to years of media.

DN: Maxima is immediately all about the Atom’s D but he doesn’t have the heart to tell her he has no D.

QP: Meanwhile, in Pittsburgh, Ronnie Raymond is having a bad day.

BW: Oberon’s might be worse. He had to ride the bus to Pittsburgh.

TGH: Can you imagine being on a Megabus with Oberon? And he wasn’t even with them until now? What the hell was he doing?

BW: He got locked in someone’s bathroom.

TGH: Well, the cancer storyline is no walk in the park, but at least we don’t have to see pages and pages of flames-oh for fuck’s sake. 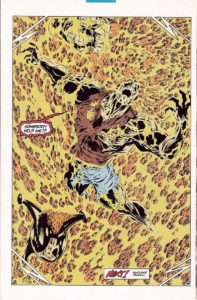 TGH: OH MY GOD OBERON IS SUPER ON FIRE!

TGH: Megabus is getting the worst review ever. “Arrived 30 minutes early, 0/10.”

QP: “Minor nuclear explosion, but the A/C was comfortable”

TGH: Will this comic ever stop filling every page with flames? Will a flaming Oberon toss himself into the nearest orphanage or gas station for safety? Find out next time!

DN: What comic are we reading?