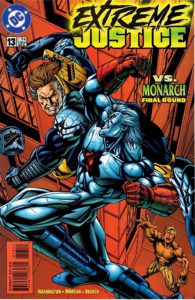 TGH: Welcome back, brave readers, to Extreme Justice! Last time, Booster Gold was fully healed by Monarch, while our heroes killed some dogs! What brave heroics will take place this week?

TGH: If the cover is any indication, Captain Atom finally beats the crap out of Booster’s savior while Booster struggles to get his shirt on.

DN: Spoiler: Booster gives zero shits about pants this issue. Despite wearing them on the cover.

TGH: I hate to ruin it for everyone, but this is, in fact, not the final round of this fight, at least not with regards to anything being resolved at all.

BW: Damn it! Also, if the cover is any indication, Captain Atom is doing a costume critique for Monarch.

DN: Pfft, who wants resolution of anything that happens in this book?

QP: Can we sue for false advertising? 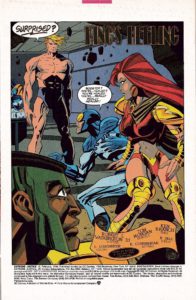 TGH: This issue is titled “King’s Heeling,” which is at least a play on the last nonsense title, though now there’s an apostrophe where there wasn’t and clearly should’ve been in last issue’s title, so I’m still mad.

TGH: Our issue starts with Booster still in his underwear, though at least he’s tidied up his suit and put it on a table.

QP: Why is Maxima using Beetle as a bench?

DN: That’s how they do on Almerac. 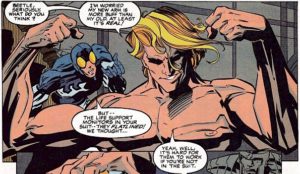 TGH: Booster spends some time flexing inappropriately while everyone continues to tell him that Monarch is actually evil. 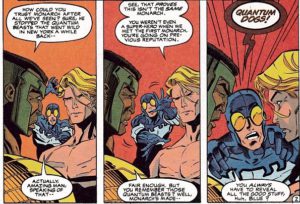 TGH: As much shit as I give this comic, the three-panel “Quantum Dogs” bit did make me laugh. It’s a mild hint of what this book could’ve been if they had decided from the beginning to have a sense of humor. 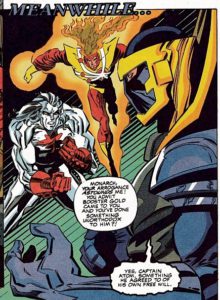 TGH: Meanwhile at the front door, Phoenix Wright has finally pieced all of the evidence together to conclude that Monarch told him already that Booster came here and he healed him.

QP: Except that translates into horrific torture in Captain Atom’s brain.

DN: “And you’ve done something unorthodox to him?” Hand job. Called it.

QP: That certainly would be an unorthodox method of healing.

TGH: He agreed to it of his own free will, Atom. It’s called consent. Look it up.

QP: Sometimes, Atom, when a man and a man like each other a whole lot, they get a bit unorthodox. 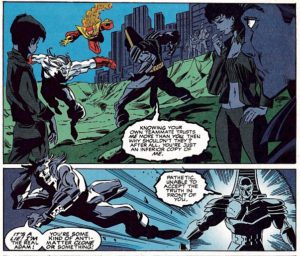 BW: We’re then somehow teleported to the surface where Captain Atom, Firestorm, and the Monarch have a dance-off. At least I *think* that’s what’s happening, because there’s a disinterested audience which is what usually gathers at dance-offs.

DN: Monarch taunts Captain Atom for being a clone. Honestly, I have no idea if he is or not, nor do I intend to research this further.

TGH: Atom can’t piece the evidence together to a meaningful conclusion and just starts screaming that it is Monarch who is some sort of antimatter clone or vampire or something. 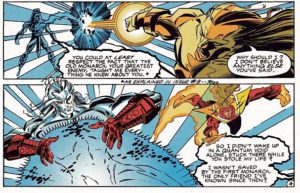 QP: I’m sure that looks good to all the innocent bystanders who are about to be collateral damage when he shoots radiation beams at Monarch.

TGH: At least Monarch is right there to heal everyone he hurts.

DN: And probably make them naked. And jerk them off. 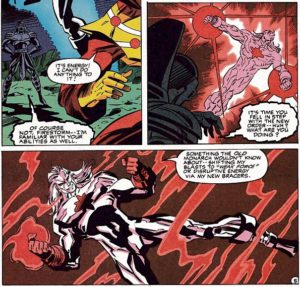 TGH: Captain Atom suddenly remembers that he has new gloves and then just starts making shit up about them.

QP: He’s explaining all this complex science behind them, when all Beetle told him was “here, these make blasts.”

BW: Seven days without a fight makes one weak? 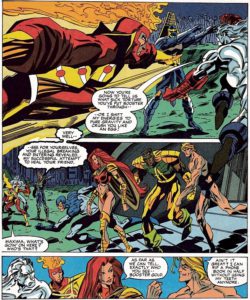 TGH: Atom threatens to kill him just in time for Booster to come out and for the gathering crowd to see that Atom is being a crazy asshole. Firestorm straight up doesn’t even know what the hell Booster Gold looks like. Ouch.

QP: I mean, we’re definitely still at the point where Atom has no proof that Monarch is a bad guy besides just saying he knows he is. 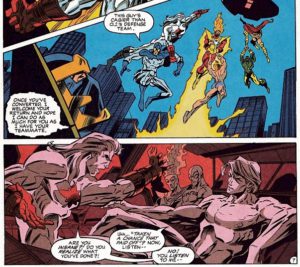 TGH: They finally make it back onto the Bug so Atom can scream at Booster for making him look bad.

QP: Atom really doesn’t give a fuck about his teammates.

BW: “Are you insane!?” asks Captain Atom, “Do you realize what you’ve done?”
“Spent seven pages without pants on, sucker!” thinks Booster.

DN: And more to come. 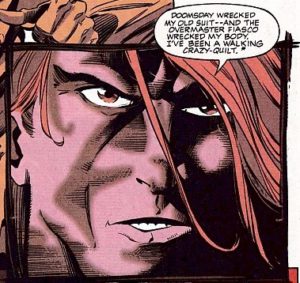 QP: Booster points out that he’s been in crippling pain and no one gave a shit, and Atom STILL doesn’t care.

DN: And that’s why Captain Atom is one of the Justice League’s greatest leaders.

TGH: I love that Booster explains everything that happened to him, and there’s an asterisk, clearly indicating that there should be a reference to what issues you could find these events, and yet there is no box to be found anywhere. Literally nobody cared about the creation of this book.

QP: Captain Atom may have been editing it. 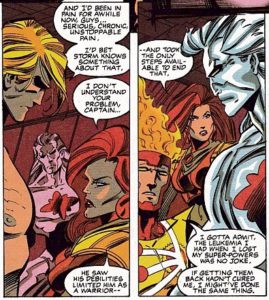 TGH: Even Firestorm, the guy Booster likes the least, agrees with him, on account of the crippling cancer he had. Atom still doesn’t care, because how could anyone deal with a guy he doesn’t like, even if nobody else hates him that much and literally their lives were at stake?

BW: In fairness, the “You Plugged It, You Fix It Rule” should’ve been in place early on. Amazing-Man, I’m looking at you. 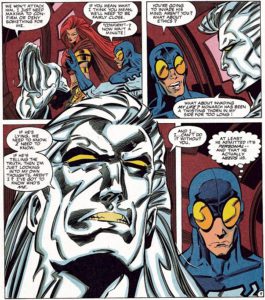 TGH: Atom decides that he isn’t enough of a shitbag and enlists Maxima to help invade Monarch’s mind, something that has been a huge moral issue, except now it isn’t because Atom wants it.

QP: Atom even admits that he is all about being ethical until someone annoys him enough.

TGH: Beetle has a problem, but Atom uses emotionally abusive tactics to let him think that he can’t do it without him, lying through his beige teeth.

BW: That three pack a day habit might not get his lungs, but it’s done a number on his teeth. 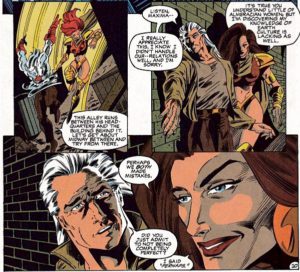 TGH: Atom tries that shit on Maxima too. Guys, blink twice if you need help.

QP: Yeah, maybe they’re all getting the Patty Hearst treatment.

BW: It’s possible. After all, Maxima *does* actually make a joke about being, “Perhaps not perfect.”

BW: We know at least half of that is right. 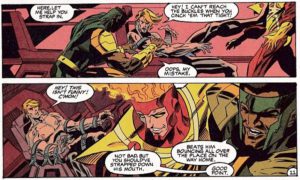 DN: Meanwhile, Amazing-Man and Beetle are forcibly strapping Booster and his long flowing locks to a chair for reasons.

TGH: Maybe they’re going to force some pants on him.

QP: Yeah, none of this makes sense. They’re annoyed he’s not sitting so they go overkill with a bondage chair. Why do the seats in the Bug even have that many straps built into them? What is Beetle doing in there? 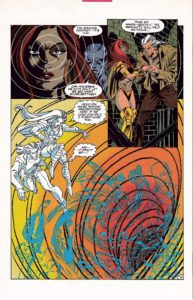 TGH: Back in the filthy alley, Maxima takes Atom’s hand and they dive into some weird-ass mindscape in an attempt to violate Monarch’s privacy.

QP: Atom is gonna post this all on Wikileaks once he’s done.

TGH: All of the pop culture references in the vortex are clearly a bold statement on culture’s grip on all of our collective thoughts and memories.

QP: And surely not just the artist being lazy. 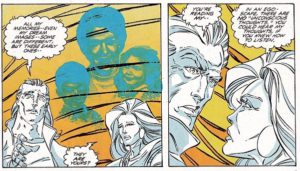 TGH: We see Captain Atom and his kids, back when he was played by Kyle MacLachlan.

BW: “You could hear my thoughts, if you could just listen.” Probably good that he can’t Maxima. 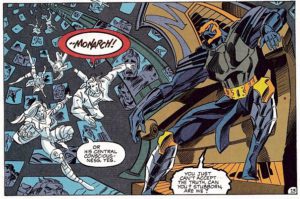 QP: They run into Monarch, who totally knows they’re probing his brain. So good plan you had there, Atom.

TGH: He’s just sitting on his brain throne, waiting for them. 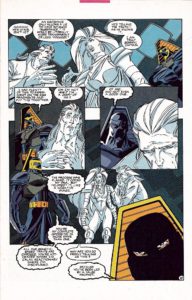 QP: Then there’s a long convoluted monologue from Monarch that tries really hard to sound like something Alan Moore would’ve written with a bad hangover, and basically boils down to the fact that Captain Atom actually really for real is a shitty clone of HIM, not the other way around.

TGH: This is glorious. I just want to pour this into a glass, aerate it, and sip it all night long.

QP: Can you get schadenfreude for a fictional character? Because I am right now so hard.

TGH: I wish the book ended right here. There can be no better ending than this. 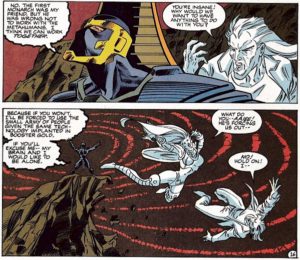 TGH: Now that Monarch has completely ruined Atom’s life, he’s just like “okay, get the fuck out of my brain now,” and tosses them like the trash they are.

BW: Back into some garbage cans no less.

DN: He also mentions he put some stuff in Booster, so Captain Atom was kind of right.

TGH: Atom is a clone of Monarch, so I guess the “being a dick” part was cloned too. 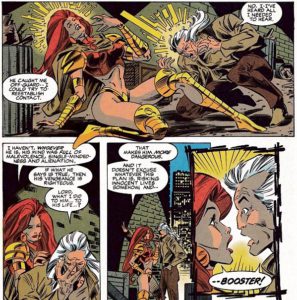 TGH: Atom cries for a second, and then they remember the part about Booster being in trouble.

QP: Definitely less important than his hurt fee-fees tho.

TGH: Meanwhile on the Bug, Booster is still tied up, but also arm wrestling everyone in his underpants.

QP: And Stalloning the fuck of them.

BW: If he had a cap on, it would totally be backwards right now.

DN: They’ve arm wrestled 16 fucking times. How bored do you have to be?

QP: Just let him out of the chair for crying out loud.

DN: No, he now has to arm wrestle Firestorm 37 times. Why? Why is this happening?

TGH: Their lives are actually as interesting as this book.

QP: Because they can’t have a dick wagging contest when he’s strapped into a chair.

BW: They’re both ex football jocks. That is literally a thing that COULD happen.

DN: Good point. Monarch’s monks inform him that they implanted the implants in the Booster. 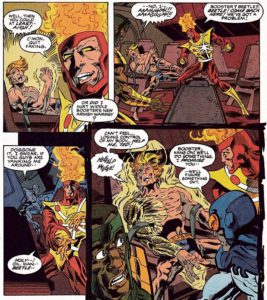 TGH: Oddly enough, right about then Booster starts freaking out and getting a lizard arm.

BW: Ted says not to worry, that he’ll fix things. Which makes Booster freak out even more.

TGH: Just as soon as he’s done making a new hat for Amazing-Man. 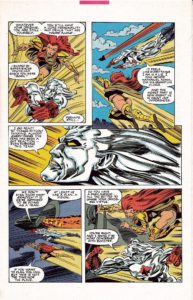 TGH: Because Captain Atom is all “me, me, me,” we’re forced to sort through his shit for a page while Booster dies elsewhere.

QP: God, nobody cares that you’re the evil clone, Atom. 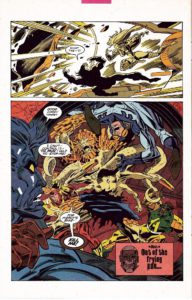 DN: And then Maxima and Captain Shitclone fly up as Booster is turning into a full-fledged tentacle monster. Cliffhanger! I can absolutely wait to find out what happens next.

BW: “I should be more concerned about Booster.” For Pete’s sake, even Captain Atom lampshades it. Just the worst.

TGH: I love the nonsense patch of fabric conveniently hovering over his mutant penis.

QP: Clearly he borrowed those undies from the Hulk.

TGH: This is the worst new He-Man figure ever.

DN: “For mercy’s sake—KILL ME!” I’ve been thinking this for 13 issues, Booster.

TGH: I like the Booster skull in the Next Issue box.

QP: Atom’s probably just telling him, “look, I know this sucks, but I’m a CLONE.”

TGH: Will Captain Atom ever come to terms with being a clone? Will he ever be able to accept the fact that his memories are shared with another person? How will he move forward from this day on? Will everyone around him stop screaming for ten fucking seconds so he can think? Tune in next time!