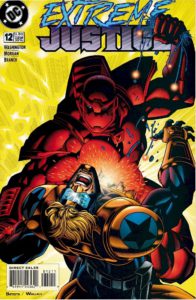 TGH: Welcome back to our exciting journey through DC’s greatest series of all time: Extreme Justice! Last time, Carol Ferris joined the team, and then a crossover happened, and then she left, creating zero actual effect on this title! What will happen this time? I mean, besides literally anything since we ended with a massive push of the reset button last time.

DN: Well, Monarch is on the cover, so I’m betting on a shitshow.

QP: Not enough prunes in the world to fix that suit.

BW: In fairness even ripping it apart is an improvement. 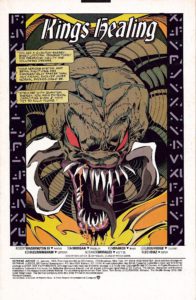 TGH: The title of this tale is “Kings Healing,” a combination of two words that doesn’t seem to make any kind of sense or reference anything that exists on this planet. Also they didn’t capitalize the H, which is driving me nuts for some reason.

BW: Or a Marvin Gaye reference and a Monarch reference making out. Which is hella awkward. Yes, no one says “hella” anymore.

TGH: This story opens with someone talking to an alien? I guess? Is it the narrator breaking the fourth wall? I guess they don’t exactly expect us to sit on this page and think about it, but they’ve never planned on my dumb ass reading this thing.

QP: I AM a quantum energy based lifeform, how did you know?

DN: “Striated with quantum energy, you have physical capacities even I have yet to fully plumb” is what I’m going to say to the next girl I meet at a bar.

QP: That pick up line will definitely get you laid. Or arrested and committed.

DN: I still have to try. Also, DC seems to be straight up ripping off the Brood design on that first page. 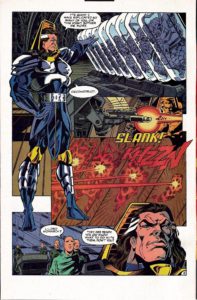 TGH: Oh, it’s Monarch, and he’s talking to what I have to guess are those monsters that ate the baby that one time a few issues ago when Captain Atom proposed to Plastique while on a high from not actually stopping monsters that eat babies.

QP: Monarch is trying so hard to give a Darkseid speech right now, and bless his heart, nobody told him it just doesn’t work if you’re only Monarch.

BW: Have to give the man credit, he’s trying to give that speech while rocking one of the worst costumes in comics AND rocking a graying temples mullet. That’s a bold man, my friends.

TGH: Monarch has his monsters killed, since apparently he didn’t mean for them to escape and kill everyone. 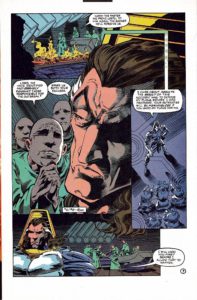 TGH: The bald guys start groveling, and Monarch tells them to “spare us both your excuses.” Who is he even referring to in this sentence? 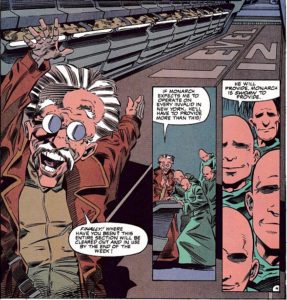 DN: All I know is the next page has the happiest deformed Einstein in the entire world.

TGH: For some reason, the bald guys are delivering baby carriages of monster guts to him to “work on” invalids. Like, heal them? He complains that he needs more monster guts to complete his work, which means that Monarch has to keep murdering monsters for his plan to work, so why is he even mad right now?

QP: I think it’s probably for the best if we all just stop actually trying to think about this section of the book.

BW: Courage! Meanwhile our heroes are playing what sounds like Risk, but looks like…a war simulation?

QP: They don’t appear to be very good at it. Shocking, I know.

BW: They’re all the guy who hops around while playing a FPS, aren’t they?

QP: Captain Atom is just stuck in a corner fragging himself with grenades.

TGH: The top-right of the panel is a clear tribute to the time Blue Beetle mixed it up with the malevolent Madmen. Except he’s way more freaked out by it this time. 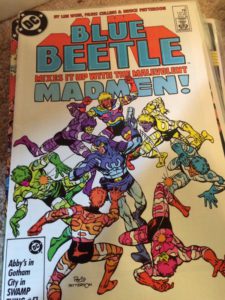 DN: Firestorm is winning by being an unpredictable asshole. 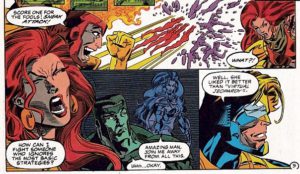 QP: Firestorm is apparently kicking everyone’s ass, but Maxima starts bragging that he can’t touch her, riiiiiiight as he destroys her team. Not shown: Everyone kicking Firestorm from the server for the next round.

TGH: Firestorm was playing a lot of Command and Conquer during this period.

QP: Maxima ragequits, and demands Amazing-Man come with her.

DN: And then things get fucking awkward. I don’t even know where to start. 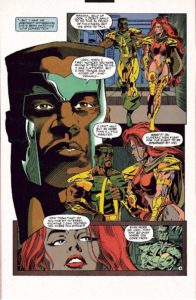 TGH: Amazing-Man decides to confront her about her interest in him, and this is just some solid gold. 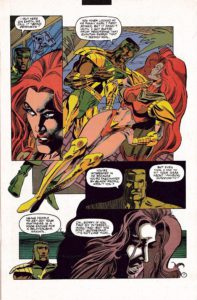 QP: Amazing-Man totally noticed that she wasn’t interested in him back when he was a 210-pound weakling.

BW: It took his abs abs getting abs.

TGH: It’s weird that she only became sexually attracted to him after he ran into her room in his underpants and then flexed for her in his underpants. She’s really misreading these signals.

QP: They were pretty great underpants.

TGH: Then he accuses her of being curious (black).

QP: And she pretty much admits it.

BW: They then decide to let bygones be bygones as he invites her up to listen to some blues CDs. Which sounds a lot like asking her to check out some etchings in his apartment, but hey.

TGH: They have a make-up fist-pump, because this is The Sims. 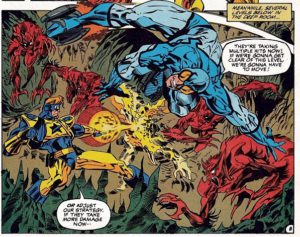 TGH: This is such a Danger Room rip-off, I expect Maxima to shave her head and start coaching them telepathically. 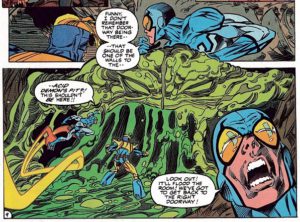 TGH: Booster and Beetle kill all of the random spawns, and then a giant green slime boss attacks them.

QP: Pretty sure this has turned into Virtual LARP now. 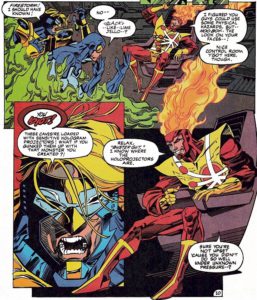 TGH: It turns out to be a Jell-O monster created by Professor Firestorm, sitting in his Cerebro chair.

BW: “LOL YOU GUIZ SUK,” is his post game assessment.

QP: Much like Professor X, Firestorm is a jerk.

DN: Buster Gut is the saddest insult in history.

QP: I wouldn’t really credit him with the wit to come up with a better one. 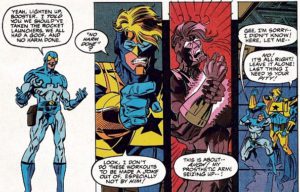 TGH: I hate when I’m trying to yell at someone for being a dick and then my robot arm seizes up and I have to scream instead.

TGH: Booster stomps off around the corner and then tells himself how his suit is failing in such a way that anyone reading his thoughts as text would understand what’s going on perfectly.

QP: Conveniently, the TV is broadcasting about Monarch healing some more people. 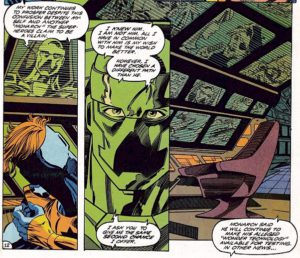 BW: “Sure I’m kind of evil, but I’ll do more for you than your friends have for months. Also I hate lime Jell-O.”  Man, this broadcast is on POINT.

QP: Booster decides to ignore the fact that his healing methods have been looked down on by actual doctors.

TGH: The doctors are just jealous! The entire medical industry is at risk!

QP: He has this one weird trick to heal you! Doctors hate him! 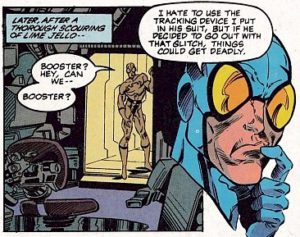 TGH: Later, Beetle tries to apologize to Booster, but he left. Beetle hates to use the thing he installed to spy on his every move, BUT-

TGH: At least Beetle got to shower and change to get the Jell-O off of him. How exactly was Booster going to clean himself?

TGH: Beetle figures out that Booster is going to Monarch’s and calls everyone to force him to return against his will.

QP: Getting healed is for chumps, Booster. Do you want to be a loser with a working body, or do you want to sit at the cool lunch table? 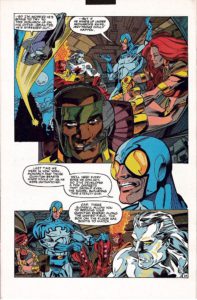 BW: Added to the list of projects that Ted has worked on instead of helping Booster — boots and gloves for Captain Atom to focus his blasting powers.

QP: And making the Bug stealthy.

BW: And hover pads for everyone. #TedKordterriblefriend 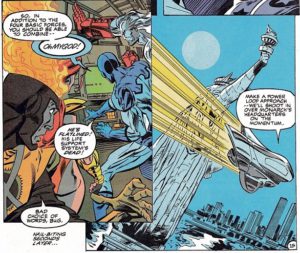 TGH: Speaking of not helping Booster, they wait until he flatlines before setting the Bug’s speed to “fast.” 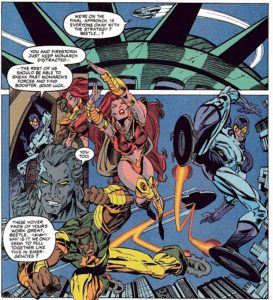 TGH: More than halfway through the issue, Atom finally speaks up as Beetle tells everyone the plan that he had to come up with.

BW: And those are actually a misunderstood reference to his favorite band.

QP: Well it’s good that someone was making the plan, since Atom couldn’t be bothered.

TGH: Atom hasn’t helped at all, and has gotten some free gloves and boots, and had a plan made for him. This whole leadership thing is easy! 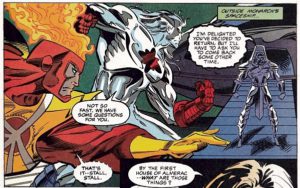 TGH: Captain Atom stands at Monarch’s door to distract him, while Firestorm stands behind him and audibly reminds him to stall him. I love it when a plan comes together.

BW: The problem with this team is that everyone thinks they’re Face, but they’re really all just Murdoch.

DN: Monarch is just the most polite super villain ever. He even asks them to come back later. 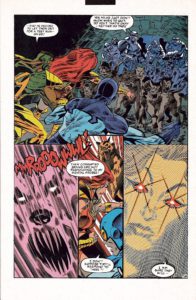 QP: The rest of the team breaks in the back door, only to get confronted by mutant guard dogs. I like that their entire plan hinged on the assumption that no one would be guarding the other entrances.

TGH: Amazing-Man somehow guesses that the dogs are the lizard monsters that Monarch experimented on after capturing them. So close, Sherlock.

QP: They’ve been jumping to the “most evil” conclusion every step of the way so far, it’s kind of a shame for them to miss the most obvious choice here. The one panel of Maxima using her powers is pretty cool at least. It’s almost cool enough to justify the existence of this issue.

DN: Yeah the crazy disco telekinesis eyes are pretty much my favorite thing in…this whole series, now that I think about it.

TGH: If only they would take advantage of stuff like that more often.

BW: This is where I jump in with my usual “Steranko is awesome” speech, right? 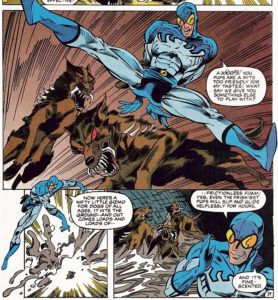 TGH: Spider-Beetle evades some dogs by tossing one of his web cartridges onto the floor. 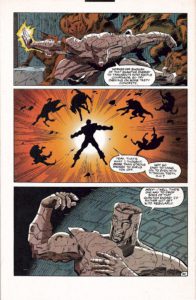 DN: Amazing-Man takes out the rest of the dogs, by absorbing the properties of…concrete. Can Mist just kill this guy already? 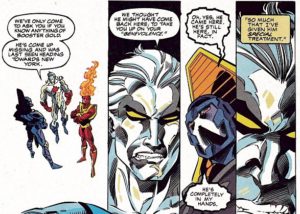 TGH: Meanwhile at the front door, Monarch straight-up tells Captain Atom that Booster is there, since there’s really nothing he can even do about it. At least Firestorm finally decided to shut up.

DN: Also “completely in my hands” and “special treatment”…Monarch jerked Booster off, pretty sure. Like, 90%.

QP: So that’s what the Kings Healing is.

BW: Does he later ask if it ended … happily?

BW: Ted, meanwhile, is looking at Twitter, but does check back in on his stalker GPS to figure out that Booster is in the next room. 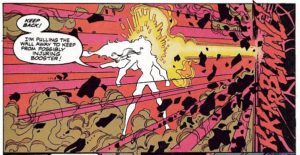 TGH: The B-Team discovers where Booster is, so instead of using a door like a bunch of losers, Maxima tears down the wall with her brain.

BW: To be fair, if I could rip down a wall with my brain, I probably would too.

TGH: Fair enough. I mean, it’s not like it’s their wall.

QP: She probably does that to the walls back at Mount Thunder anyway. 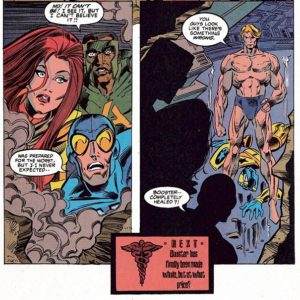 DN: And Booster is in his skivvies, so I’m at 95% he totally got an HJ from Monarch.

DN: Booster has all his arms and legs and I skipped the part where he lost those things.

QP: But does he have his dignity? Judging by those undies, no.

BW: Someone asked Booster the tighty whities or boxers question and he was too embarrassed to admit he wears Depends.

DN: “In the future we all use diapers all the time.”

QP: Maxima is about to get confused about Earth customs again.

TGH: She already saw Amazing-Man hanging out in his underpants, and now Booster. Hell, she’s basically in her underwear. Captain Atom is pretty much naked. Firestorm and Beetle are the weirdos here.

DN: What was Monarch’s process, anyways? Because Booster’s dumb armor is just scattered behind him like he just stripped down to his nethers.

TGH: Booster has finally been made whole, but at what price (besides a hand job)? Is that old suit recyclable? And is Captain Atom coming up with more and more idiotic topics to keep Monarch busy? Find out next time!